Greece: Zeroing in on our newest market

Greece has a vibrant history dating back more than two and a half thousand years.

Now, the country’s past intersects with the present – shaping the way modern Greek consumers think and feel.

We’ve cut through the noise and pieced together how they stand apart from the global average.

Still recovering from an economic crisis, they’re slower to adopt new technology – both because of its financial cost, and because they tend to have less trust in institutions and big data.

But while Greece lags behind in tech adoption, its consumers have other priorities.

They’re fast emerging as some of the most community-minded and inquisitive individuals on the planet. They’re passionate about social issues and they dream of traveling the globe.

For brands looking to zero in on this audience, it’s pivotal they get to know the full story.

Greeks are passionate about their country’s long and rich history, and this is indicative of how they like to spend their free time.

They’re 43% more likely than the average global consumer to be arts and culture enthusiasts¹.

As the birthplace of theater, it’s perhaps unsurprising that at 48%, Greeks are more interested in it than any of our other 46 surveyed countries.

But their cultural interests are broad – they love books, museums, and fine arts too.

And they also show a fondness for other more traditional forms of entertainment – they’re more than twice as likely to say their preferred way to listen to music is via the radio, or that they’re interested in playing board games.

In light of this, companies are adopting Greek culture as part of their identities.

Zeus+Dione is a fashion brand doing just that, describing itself as a “unique interpretation of myth and tradition”.

In Greece, community spirit is all-important.

People in Greece are 22% more likely to say it’s important to contribute to their community.

They’re passionate about looking after the environment too – 54% always try to recycle, which is considerably above the global average of just 39%.

It’s likely that a combination of religious and cultural influences have helped shape these altruistic tendencies.

The Orthodox Church is a strong influence and Greeks are 68% more likely than other Europeans to say their faith is important to them.

They’re also considerably more likely to describe themselves as traditional, and while Greece’s population does skew older, this trend persists for its younger consumers as well.

Their online habits are also shaped by this community spirit. Consumers in Greece are more likely to discuss politics online, to use social media to support good causes, or to follow charities.

For brands this is key – good CSR in Greece goes a long way.

Consumers there are much more likely than the average consumer to want brands to support local suppliers, be eco-friendly, and be socially responsible.

One brand who’s tapped into this sentiment is Nescafé. The coffee brand launched a campaign in 2016 to provide unemployed young Greeks with professional training and job certifications.

As we’re about to see, Greece’s consumers are strong-willed when it comes to their finances. But brands should take every opportunity to help.

A combination of the Greek debt crisis and – more recently – the economic implications of COVID-19 have been devastating for the financial security of the country’s people.

Compared to the rest of Europe, Greece has significantly higher unemployment levels and a below average home ownership rate.

But we can dive far deeper than these rigid metrics and truly discover how Greeks feel about their finances, and what it means for their purchasing habits.

Consumers in Greece are 35% more likely than the global average to be good at managing their money – over half say that they are.

And this has a serious knock-on effect for when they interact with brands; they’re 54% more likely to say they spend time looking for the best deals.

They also show an above-average tendency to choose to buy cheaper own-brand products or discover brands through product trials or price comparison websites.

But it’s perhaps online shopping where they’re the most financially savvy, being much more likely to make a purchase online if they’re able to get free delivery, loyalty points, or even an entry into a competition.

Ultimately, while consumers in Greece are ready to spend, they’re going to be smart doing it.

Interestingly, nestled in among these financial incentives are calls for security when shopping online.

For many, the ability to pay with cash on delivery feels safer, for example. While guest check-out ensures they’re able to maintain their anonymity.

This likely lies with their deep-rooted concerns for new technology.

Greece’s recent economic history has reduced trust in institutions. When combined with their fondness for tradition, the result is more apprehension around new technology.

Just 30% of consumers in Greece are confident using new technology, compared to 44% globally.

They show above-average concerns about how their data is used online, both by the government and by companies.

Feeling secure is crucial and many consumers in Greece are willing to forgo the benefits of new technology for this reason.

Brands need to take note of this tech skepticism. While digital offerings may be key to winning over consumers in other markets, in Greece it’s a different story.

This is evident by their device usage. While mobile has overtaken desktop as their most important device to access the internet, this difference is far less pronounced than in other parts of the world.

Even in Europe, which has been slower to adopt a mobile-first mindset, Greece is playing catch-up: 42% still say they prefer to use their desktop devices – which is significantly above the European average of 35%.

As a result, some mobile applications are yet to take off. For example, just 14% have used a mobile payment service in the last month – compared to a European average of 25%.

Instead of new technology when looking for a new mobile phone – such as AR, biometrics, or 5G – they’re more likely to want improvements in what they already have, and that includes enhanced camera capabilities.

Although it was broadcast in the U.S., Apple’s “Take Mine” commercial perfectly reflects these consumers’ tech priorities, while showcasing other important aspects of their culture.

Tech-skeptics were won over by the phone’s then-new Portrait Mode. And since the ad also featured a grandmother and a priest, it also touched on the cultural aspects and sense of community that’s so important to consumers in the country.

They know that the world is a big place and they’re ready to explore it.

Globally, 50% of consumers say they like to know what’s going on in the world – this rises to 71% in Greece.

Their interest in the world has materialized into a love for travel. An activity that around two-thirds are interested in, making it more popular there than in any other country we track.

And in Greece, where consumers are 46% more likely to use the internet to research new places and 40% more likely to follow travel writers and companies on social media, there’s plenty of opportunity to reach them.

This is especially noteworthy for domestic travel providers. Compared to the average consumer, those in Greece are 15% more likely to be planning a domestic vacation at the moment.

We’re so excited to have added Greece to our core dataset. This is just a glimpse into the lives of its consumers, and we can’t wait to learn more. 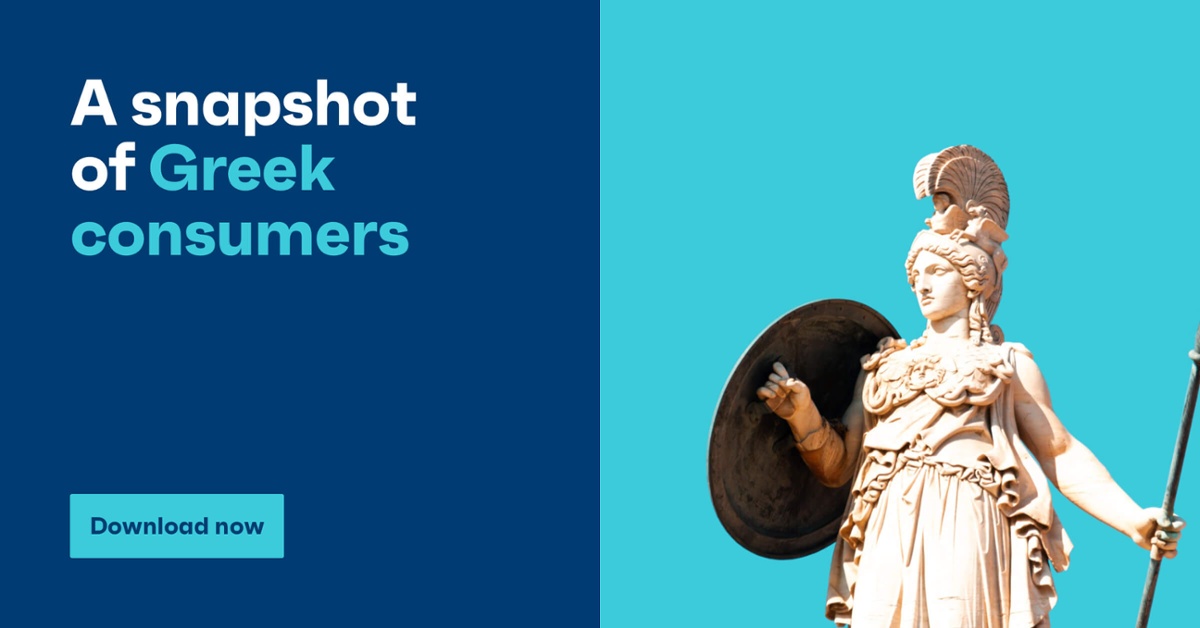